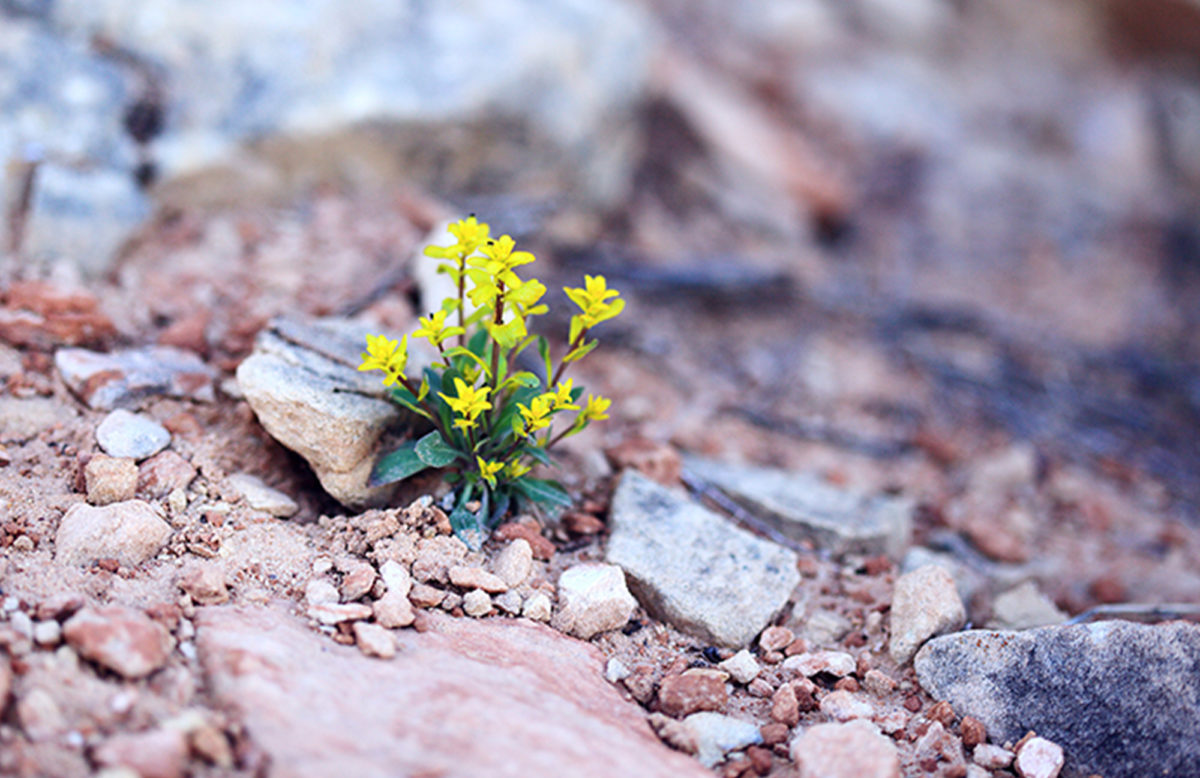 Dedicated to the women who, in this desert time, have led Bible studies on Zoom, sewn face masks and scrub bags, schooled children, supported spouses, wiped tears, baked bread, made meals, served on the front lines, and cried in your closets. In the dryness of our time, may you find grace and strength at the well of Living Water

Have you ever noticed how life grows beauty in and out of the most unexpected places? It’s a funny thing, really, because we often think that the most obvious place to look for life and beauty is in colour, light, music. Expected places. And it is there. But often richer, truer forms of it must be sought out, searched for, mined in the places that are muted, dark, silent.

It’s a woman who first feels the whisper-soft tremor inside of her; the first promise. It is she who knows most intimately how in dark and hidden places that cannot be seen but can be felt, the quiet tremble is a sign pointing to stretching that is on the way. It’s a sign that she will have to swell to accommodate, that there will be pain and tearing. Because life cannot come forth otherwise. Life does not emerge apart from blood, and sweat, and tears. Before the beautiful, there is the difficult.

Seeds of Love … Watered With Tears 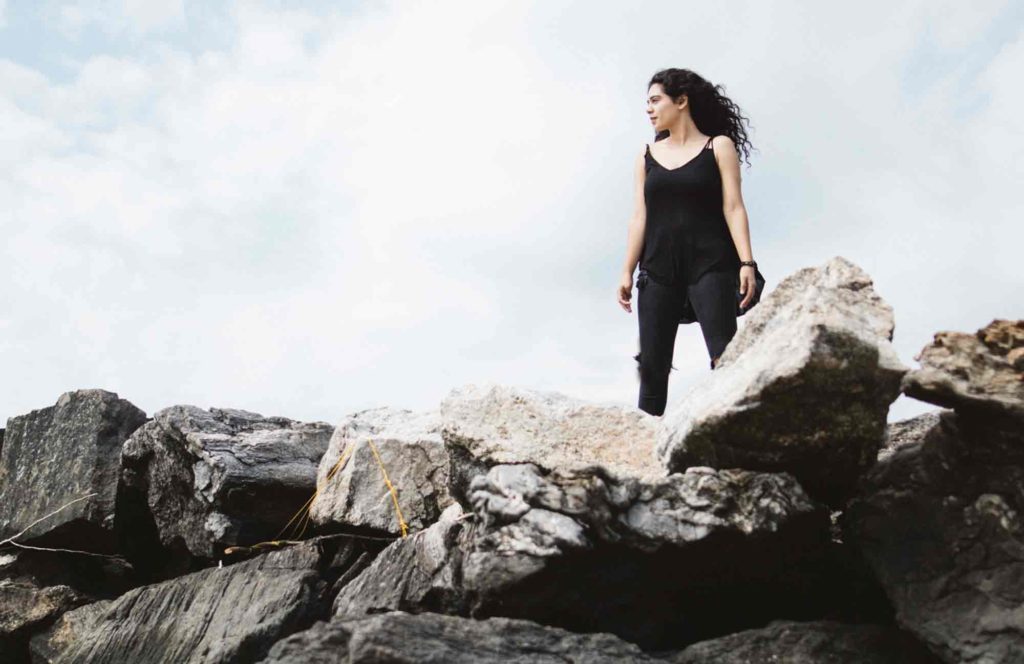 A woman knows that what broke forth with a cry of triumph, what was cradled close in love and tenderness, will eventually be released. Because what has lived in us for a time and with us for a time is not truly ours. Women know this, and that’s why our seeds of love are often watered with tears. We know that life and beauty are squeezed out if they’re not released to be planted again – they’re not ours to hold and hide away; they’re given as gifts to be shared.

Life’s first whisper is synced with our heartbeat, so as first witnesses to the beauty of new life, women are often the first to stand beside our sisters and brothers, our sons and our daughters, to whisper life to them. I have heard the whisper and seen its growth. In a time when life seems fragile, in danger of being muted, darkened, silenced, I have seen mothers and sisters and daughters whisper life all around them.
As the director of ministry to women at FAC I have seen my sisters swell to accommodate new life that the Spirit is growing in and around them. I know they have felt the pain of the stretching. I know the labour has been difficult and endured with tears. But with great courage, they’ve borne the pain to know the joy. This new way of living and doing ministry has been hard. My sisters have held the hands of husbands, children, grandchildren, and friends who are sick, scared, uncertain. They’ve sung lullabies of love while their own hearts trembled. My sisters have swollen in their capacity to nurture life. While themselves hungry, they’ve fed others. While themselves frightened, they’ve comforted. While themselves aching from pain, they’ve nursed the wounds of others. They’ve laboured – they’ve sewn, listened, learned, instructed. My sisters have not turned away from the task that confronts them; they’ve trusted the One who made them for this purpose. They have washed his feet with their tears. 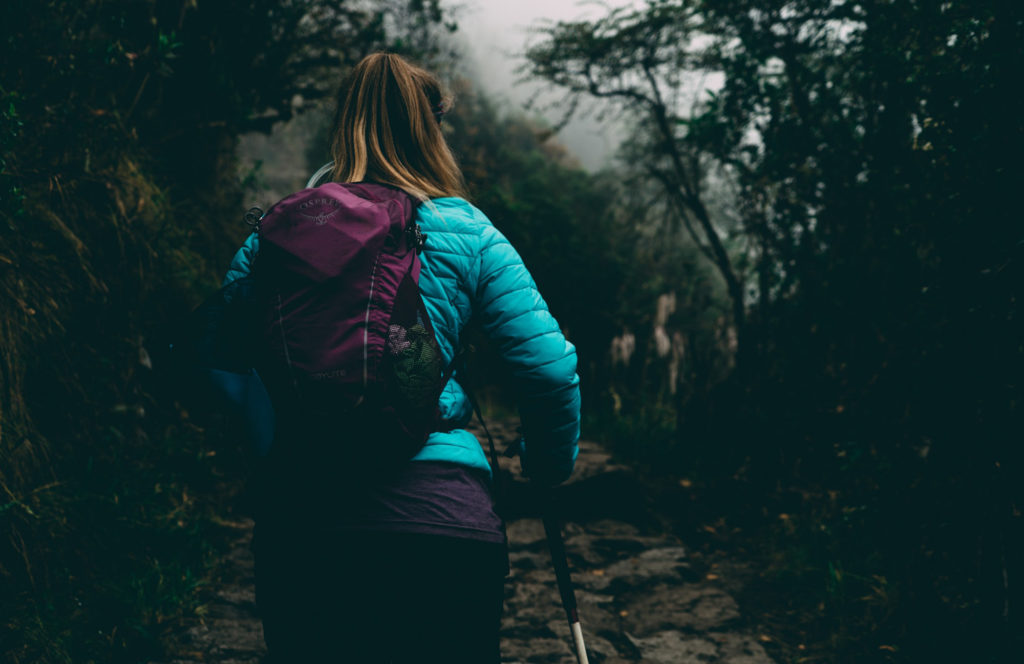 This has been a time of labour. Tears. Pain. It’s also been a time of new life, which always comes through blood. It has always been this way. Long ago, Eve waited for the redemption promised through a seed that would grow in her. Her tears watered the ground in sorrow before they were wiped away. Long ago Sarah waited for her son of promise. The years were wet with weeping before they were filled with laughter. Long ago the mother of our Saviour knew the tremor of hope and new life. But this promise came with the promise of pain that would pierce her heart. There were many long nights of weeping before her morning of joy. For now, part of the pain of new life is it still comes with the promise of death. Beauty brings pain. For now, the morning of joy follows the night of weeping.

But take heart. Because long ago, there was a woman bound in terror and darkness and death before our Saviour set her free. She was the one he chose to be the first to see his new life. But this was a different kind of new life: Resurrection life. It comes with the beautiful promise that all this stretching and growing and labour and pain will one day burst free from the cycle of life and death, beauty and sorrow. All who find life in this Saviour will one day awake to a new life which has no more darkness, no more pain, no more sorrow, no more death. So labour on, dear sisters. Labour with your eyes on the One who bought eternal life with his blood. Labour on knowing that his cry that it is finished secures our promise. Labour on knowing that your labour in the Lord will not be in vain.

If you’re reading this and find you want to be a part of this body of women, come join us! Our Bible study is always open. Our Facebook group is always open, and you can find it here facwomen2women.

Long Ago: Stories of Pain and Promise

If you want to read Eve’s story, you’ll find it in Genesis 2:18-4:26. It begins beautifully with her being God’s response to Adam’s loneliness. When Adam first laid eyes on her, he exclaimed poetically, “This at last is bone of my bones and flesh of my flesh” (Genesis 2:23). From there it took a terrible turn when she, together with her husband, rebelled against the High King of Heaven after being tempted by a serpent. But God promised that one day, her offspring would defeat the serpent (Genesis 3:15). She must have felt such great hope when her son Cain was born. And then another son, Abel, and with him, more hope, fuller joy. Can you imagine how her heart must have broken and her hope scattered when Cain murdered Abel?! Then, another son, Seth, was born. When this son and his family began to call on the name of the Lord, Eve must have seen the sun’s rays creep over the horizon and pierce her long night of darkness.

Sarah’s story can be found in Genesis 11:27-23:20. Her story begins with disruption (bet you can relate to that!). Her family moved from home towards a place they did not know and hadn’t been. The journey was long, difficult, and complicated. It included 2 separate occasions of Sarah’s husband putting her in harm’s way to protect himself. But the underlying sorrow of Sarah’s story is that in a culture that prized motherhood, in a time when sons were needed to protect and provide for the family, Sarah was barren. And not just a little bit, but 90 years old and past the time of her monthly cycle. Her lack of blood seemed to seal the promise of death rather than life. But, because nothing is too hard for the Lord, Sarah was promised a son. When he was finally born she named her promised life ‘laughter.’ Joy came after the mourning.

One of the places that you can read the beginning of Mary’s story is in the Gospel of Luke 1:26-2:38. It begins with a startling interruption into what was an otherwise ordinary life. A young girl set to marry was visited by an angel from God and told that despite the fact she’d never been intimate with her future husband, she was going to have a baby. That news wasn’t just surprising (never mind the method in which it was delivered!); it carried a potential death sentence. Women who’d been with a man before or outside of marriage were to be stoned. She knew she hadn’t, but the changes her body would be going through would tell a different story to those who saw. The news of her coming Son was glorious – he would be great and called Son of the Most High and he’d sit on the throne of King David reigning over an eternal kingdom – but it was also difficult. It was also said of her Son that because of him, many of her people would fall, and a sword would pierce her heart. If you go on and read the Gospel accounts of Jesus’ life through the eyes of a mother, you’ll see the pain she must have known as her Son was rejected, ridiculed, mocked, beaten, and killed. She stood by, watching and weeping, and surely felt physical pain when the soldiers put the sword through her Son’s side. During those dark days when he lay silent in the tomb of death, she must have battled despair. Then, on a Sunday morning, she awoke to find beauty, hope, life, and joy waiting for her, turning her mourning into dancing.

Mary Magdalene’s story concludes in John 20. She, along with Jesus’ mother, had stood at the foot of the cross watching her Saviour die. She, who’d never known freedom or acceptance or love until Jesus, wouldn’t leave his side as he suffered, died, and was buried. Though men had prepared his body for burial, she wanted to offer her acts of service to her Saviour, so she went back to the tomb on Sunday morning. It was Mary who found it empty and told Jesus’ disciples. It was she who stayed weeping, feeling like the night she’d thought was over might be back to stay. And it was Mary who first saw the risen Saviour. Mary heard him ask her why she was crying, and, when he called her by name, she knew him in an instant. Having seen and heard her Saviour once more, all Mary wanted to do was cling to him, but he told her to go. Tell others. What was good news for her is good news for everyone.