Seeing stories brought to life onstage remind us we all have a story that’s part of a bigger story. Dramatic arts point us toward the truth being taught in weekend services at both campuses, while full-length special productions hosted at the FAC Deerfoot campus allow us to share a bit of hospitality with the broader community.

Gather with other 16 yrs.+ actors for community, stretch your stage muscles, and allow both your skills and your character be sharpened through the time we spend together.

Get Connected
Next meeting is February 24, 2020
7:00 pm, Harvest Rooms CDE
FAC Deerfoot; no cost or registration

Adult actors of all ages are invited to explore being part of the onstage team for Dinner Theatre 2020, Letters to Sala by Arlene Hutton. Performance Dates: May 27-31, 2020. Auditions will be fun and relaxed – no prep required! For more info, contact Cheryl Siebring.

Creative stage sets, graphic design, art exhibits and permanent art installations invite us into worship or mark a significant moment in our journey. We’d love to hear from you if you’re looking for opportunities to create at and for FAC.

Stations of the Cross – Call to Artists

FAC Deerfoot will be hosting an art exhibition during Holy Week (April 6-10, 2020) based on 8 of the traditional stations the cross. We are calling out to all disciplines in the art world … visual artists, poets, singers, song writers, sculptors, actors, writers, musicians and anyone else who considers their craft an artistic expression. We’re inviting artists to individually or collaboratively create art that depicts one of the Stations which parallel Christ’s journey to the cross. We encourage artists to use multiple disciplines and creatively use sensory expressions. Each station will have a separate space dedicated to a single station.

Station choices are awarded on a “first come first serve” bases and participants will be asked to present their intent and plan to create one of the stations.

NOTE: FAC is curating each planned presentation prior to installation and reserves the right to approve or refuse.

The following are the chosen 8 Stations of the Cross, supported by the record found in the Gospel accounts about Jesus’ journey:

Now Jesus stood before the governor; and the governor asked him, “Are you the King of the Jews?” Jesus said, “You say so.”  But when he was accused by the chief priests and elders, he did not answer.  Then Pilate said to him, “Do you not hear how many accusations they make against you?” But he gave him no answer, not even to a single charge, so that the governor was greatly amazed. . . . So when Pilate saw that he could do nothing, but rather that a riot was beginning, he took some water and washed his hands before the crowd, saying, “I am innocent of this man’s blood; see to it yourselves.” . . . and after flogging Jesus, he handed him over to be crucified. (Matt 27:11-14, 24, 26b)

Then the soldiers of the governor took Jesus into the governor’s headquarters, and they gathered the whole cohort around him. They stripped him and put a scarlet robe on him, and after twisting some thorns into a crown, they put it on his head. They put a reed in his right hand and knelt before him and mocked him, saying, “Hail, King of the Jews!”  They spat on him, and took the reed and struck him on the head.  After mocking him, they stripped him of the robe and put his own clothes on him. Then they led him away to crucify him. (Matthew 27:27-31)

Carrying the cross by himself, he went out to what is called The Place of the Skull, which in Hebrew is called Golgotha. (John 19:17)

They compelled a passer-by, who was coming in from the country, to carry his cross; it was Simon of Cyrene, the father of Alexander and Rufus. (Mark 15:21)

Station 4:  Jesus Speaks to the Women

A great number of the people followed him, and among them were women who were beating their breasts and wailing for him.  But Jesus turned to them and said, “Daughters of Jerusalem, do not weep for me, but weep for yourselves and for your children.  For the days are surely coming when they will say, ‘Blessed are the barren, and the wombs that never bore, and the breasts that never nursed.’  Then they will begin to say to the mountains, ‘Fall on us’; and to the hills, ‘Cover us.’  For if they do this when the wood is green, what will happen when it is dry?” (Luke 23:27-31)

Station 5:  Jesus Is Stripped of His Garments

When the soldiers had crucified Jesus, they took his clothes and divided them into four parts, one for each soldier. They also took his tunic; now the tunic was seamless, woven in one piece from the top. So they said to one another, “Let us not tear it, but cast lots for it to see who will get it.” This was to fulfill what the scripture says, “They divided my clothes among themselves, and for my clothing they cast lots.” And that is what the soldiers did. (John 19:23-25a)

Station 6:  Jesus Is Nailed to the Cross

And they offered him wine mixed with myrrh; but he did not take it. And they crucified him, and divided his clothes among them, casting lots to decide what each should take. It was nine o’clock in the morning when they crucified him. The inscription of the charge against him read, “The King of the Jews.” And with him they crucified two bandits, one on his right and one on his left. Those who passed by derided him, shaking their heads and saying, “Aha! You who would destroy the temple and build it in three days, save yourself, and come down from the cross!”  In the same way the chief priests, along with the scribes, were also mocking him among themselves and saying, “He saved others; he cannot save himself. Let the Messiah, the King of Israel, come down from the cross now, so that we may see and believe.” Those who were crucified with him also taunted him. (Mark 15:23-32)

Station 7:  Jesus Cares for His Mother

Station 8:  Jesus Dies on the Cross

When it was noon, darkness came over the whole land until three in the afternoon. At three o’clock Jesus cried out with a loud voice, “Eloi, Eloi, lema sabachthani?” which means, “My God, my God, why have you forsaken me?” When some of the bystanders heard it, they said, “Listen, he is calling for Elijah.” And someone ran, filled a sponge with sour wine, put it on a stick, and gave it to him to drink, saying, “Wait, let us see whether Elijah will come to take him down.” Then Jesus gave a loud cry and breathed his last. And the curtain of the temple was torn in two, from top to bottom.  Now when the centurion, who stood facing him, saw that in this way he breathed his last, he said, “Truly this man was God’s Son!” (Mark 15:33)

For more information or to register as an artist, please contact Heather Wile. 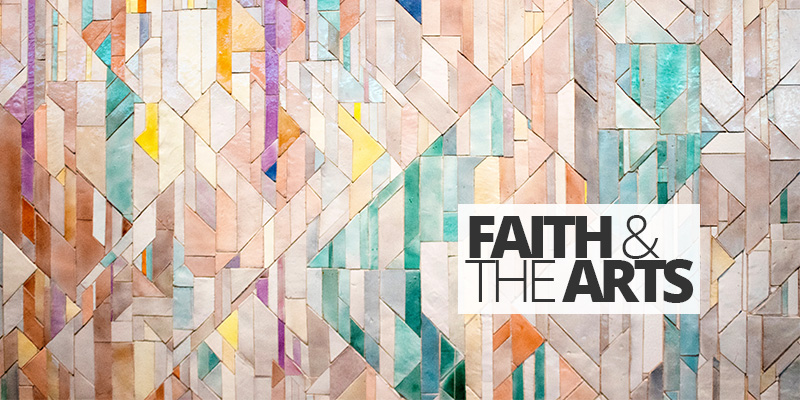 Meet the first Monday of each month at the FAC Deerfoot campus to explore the role of the senses in our Christian faith through discussion, artistic expression, and prayer, with the aim of connecting artists and serving the church community at FAC. All skill levels welcome! Questions? Contact us.