Of Hammered Gold: The Purpose of Life 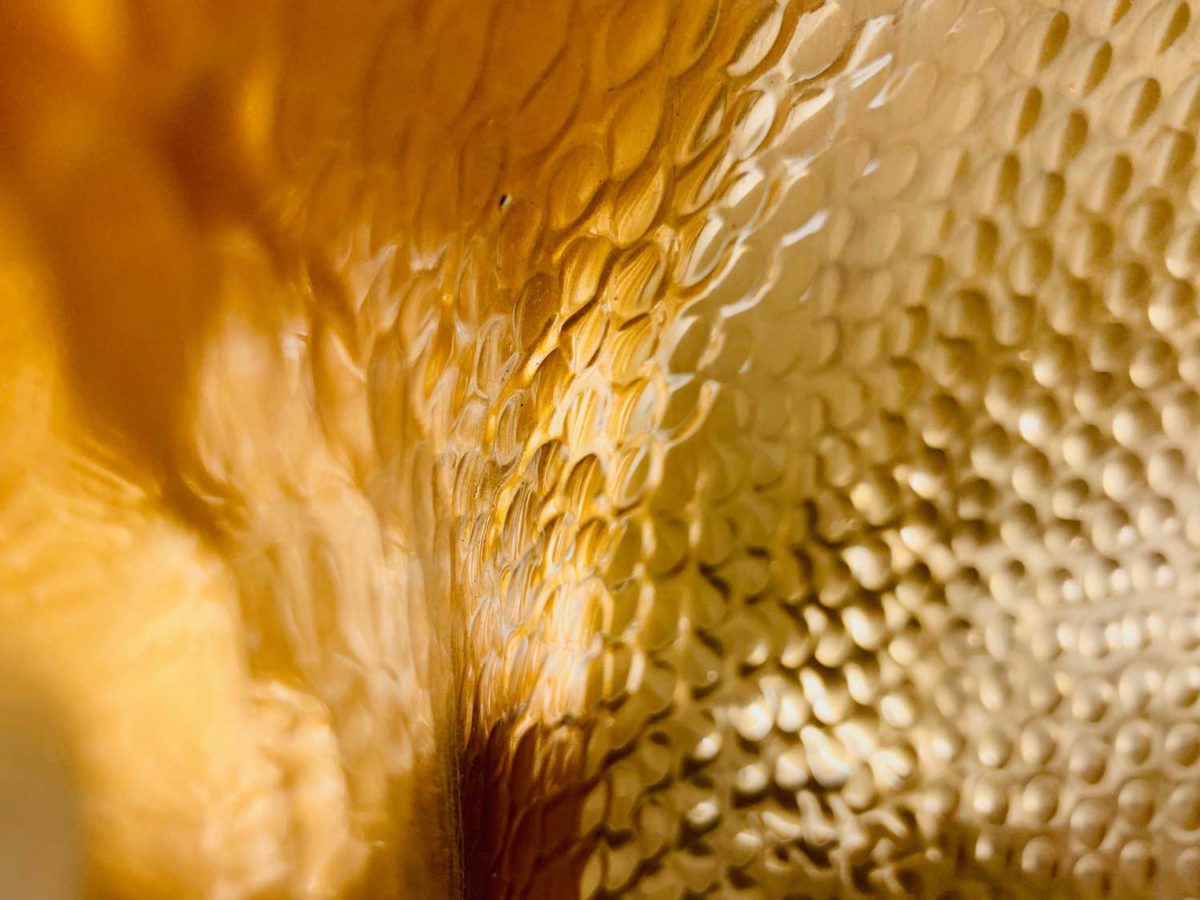 It’s all meaningless. Albert Camus said, “At any street corner, the feeling of absurdity can strike any man in the face.” I think Camus’s recapitulation of Solomon resonates with most people at least once in their life, if not recurrently. Left or right, north or south, sushi or Vietnamese … None of it matters when ultimately it all turns to dirt, so what’s the point? Is there one? As long as there have been people there has been that unnerving and weighty question haunting us. But it hasn’t gone unanswered; the human race has indeed raced toward the first answer attempting to quench its burn.

The Search for Purpose

Start here on this continent. In 1820 a man named Joseph Smith was purporting to have a vision in a grove. He would later start a movement now called the Church of Jesus Christ of Latter Day Saints. His answer: become a god. As the 5th president of the movement said, “As man is, God once was; as God is, man may become.” The purpose of this polygamous, polytheistic pedagogy is to follow the eternal law of progression and become a god.

Move west across the ocean and back in time 2½ millennia to find a man sitting under a Bo-tree meditating; 49 days later he would give us another answer. The first Buddha would speak of enlightenment, nirvana. Though in form it looked diametrically different than his Hindu upbringing, functionally it was the same – indeed the same as a lot of eastern traditions – simply put, the dissolution of one’s illusory self into the grand, undifferentiated equilibrium. The meaning one can find in life in this vain vein is to simply realize that you are an unnaturally separated part of a whole, and that peace can be found in losing yourself into the whole.

Continue west in a caravan, hop over the Persian Gulf, and forward through time 1000 years. Pause on the Arabian Peninsula to hear a man named Muhamad recount an encounter with Gabriel; Allah had something to say on the matter. Chapter 51:56 of the Qur’an says, (Allah speaking) “And I did not create the jin (angels/demons/spirits) and mankind except to worship me.” The chief end of man as a Muslim is to worship the creator. C’est finis? Hardly. When you peel this back – or to follow the thrust of this blog and ask “why does the Qur’an instruct Muslims to worship,” – you find out that the teachings on Jannah (paradise, but literally translated, gardens) and al-Qiyamah (the day of judgment, literally reckoning) afford the doer of good works a long and pleasurable life. The worshiping of Allah is the working of good works. Chapter 7 of the Qur’an tells us that Allah will weigh the scales of our deeds and “those whose scales are heavy will have good success” (7:8). The transcendent significance this life offered to Muslims is an eternal “atta boy,” a bone given at the end of a self-made righteous life as a treat for doing what you were made for.

Travel further west still to the European continent and find all these answers epitomized by one word: humanism. The end of man in humanism is the means by which happiness and comfort are sustained. Eat. Drink. Be merry. Repeat. The humanist answer to the question “why are we here?” is a non-answer; it’s a distraction of a butterfly, a shiny thing, or the sweetness of honey. Why are we here? Good question – but have you tried chocolate? The humanist is concerned with the self and its greatest good.

For the Mormon, living your best is to become glorified as a god and rule your own world; what could be better than to “be like Him”? Humanism. For the traditional Buddhist you’re at your most ideal state when you’ve lost the illusion of identity and as a wave fallen back into the ocean. Humanism. For the Muslim you worship your master by accumulating “heavy scales” of good deeds for the prize at the end of time. Humanism.

Where Does All This Leave Us?

So how does the Christian answer the question? Or perhaps the better question is, “How does the Bible answer it?” It’s not past the Christian to answer in a similar fashion, “Ask Jesus to be your forever Friend so you can go to Heaven.” Friends, readers, if that is all we offer then we are just another brand, making the same product. The call to purpose in the Bible is not one of self-interest; in fact it’s one of self-sacrifice, suffering, death, and kneeling to Him whom all this is for: Jesus.

Jesus tells us that we are the light of the world (Matthew 5). Curious, because John would say of Jesus that He was the light (John 1) – then Jesus Himself would concur with His beloved apostle’s assessment in the 8th chapter of that same gospel that He indeed was the light of the world. The curiosity, like Colossians 2:3 makes obvious, is cleared up in Jesus, or more specifically how He said we are the light: “… nor do people light a lamp and put it under a basket, but on a stand.” We are the light insofar as we are the stand the light rests atop. We are lamp stands; why we are here as Bible-thumpin’ Christ-lovers is to hold up, shine, and proclaim the light: Jesus.

In Exodus we find instructions God gave the newly-emancipated Hebrews to build a temple, and a whole mess of stuff to go inside of it, the whole lot of it rife with symbolism and replete with Christological foreshadowing. In chapter 25 and verse 31 we learn of the blueprints for the lamp stand, a vessel inside the temple that would represent the revelation of God … sort of.

As I said, “most” everything in the temple and sacrificial system was a type of Christ, and this includes the light on the lamp stand, a light that must “burn continually” (Leviticus 24:4). While the light represents the wisdom and gracious revelation of God – fodder for another blog – the stand in the tabernacle (no small thing I might add) I believe is actually a type of us.

I find it interesting that the lamp stand had to be “of 1 piece” and “of hammered work.” The lamp stand was fairly big; no Hebrew gold-panner is finding a chunk of gold that big. And we know they left Egypt with all their treasures, so isn’t it obvious that they smelted down a bunch of gold to make the one piece? Probably, but I’m not above circumlocution … We are like this, too – mined from the DNA of 2 parents, mountains that can define parts of us and our character for our entire lives; but we’re smelted (wonderfully and fearfully, I might add) in the womb of our mother, then poured out into the form of human. We are of 1 piece, which perhaps is why the next part is so painful. Then the artisan starts swinging.

Is There Purpose in Pain?

My confusion with this next step betrays my longing for humanism to be true. When you pour gold out into a mould and it cools, would it not be smooth and glistening? Would it not dazzle its observer when it catches the sun? When we’re born are we not pure and unsullied by pollutants of a broken world? But the hammer comes for us all, no? Learning how to breathe and communicate and share chips away at us; discipline and consequence sink deeper; loss of loved ones and abuse craters its way through our flesh … The lamp stand wasn’t spared the hammer – and neither is any child spared the blows of life. But listen to the humanist chiding against the thud. Why do we grumble? Simply, because gold can be pretty – and so can we. 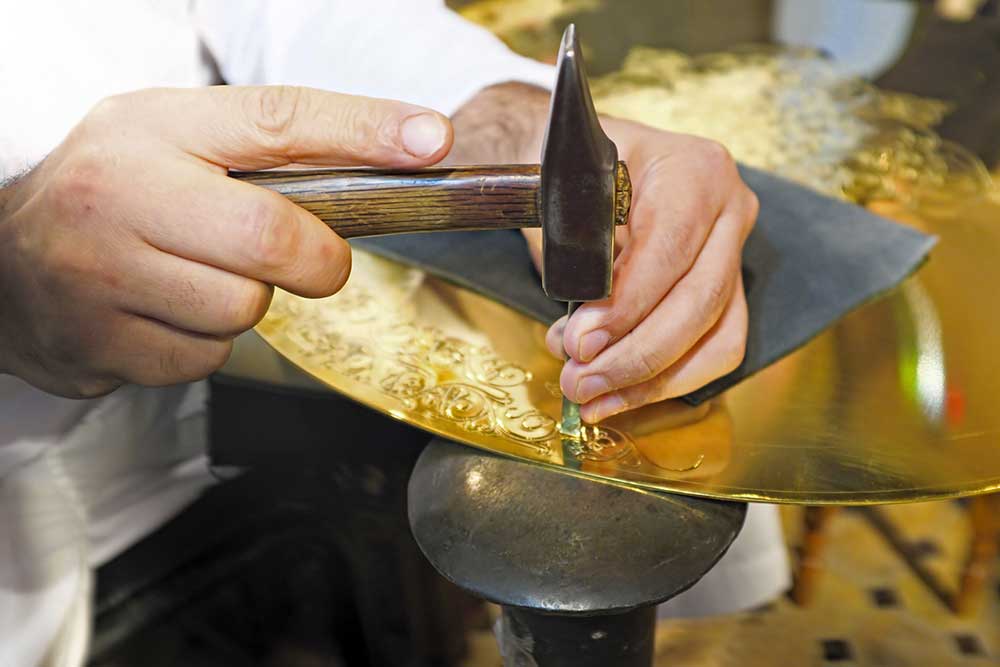 Humans are pretty impressive; we can shine and glitter and draw all kinds of attention to ourselves because of what we are. So we chafe under the hammer … It ruins us, it takes away the pristine conditions that we feel empowered and fulfilled by – and why not? We’re gold, after all.

But did you know gold is far more useful that it is shiny? Gold is extremely ductile, meaning it can be beaten out very thin and still hold certain qualities – like strength, for example.  A 1-ounce nugget can be beaten out into a foil only .00025 cm thick and 6 feet square. Now, from an obvious physical law we know that 2 things can not occupy the same space at the same time; when the hammer strikes, the gold grows.

We mourn the forging of our usefulness because it destroys the countenance of our meaninglessness … Go figure.

So … You’re Saying This Is God’s Idea?

To chase a tangent for a moment, am I really suggesting that God does or allows other agents to literally beat out of us our potential? Well, spring the trap … Sure, why not? For one thing it does seem biblical … The Bible shows us what it looks like to have God at work in us; God disciplines and chastens us if He indeed loves us (Proverbs 3:12, Hebrews 12:6). But why? Well, John 15 gives a clue, and another metaphor. If we “carry the light” – or, as Jesus put it in John 15, “bear fruit” – then it is the Father who prunes those vines for the purpose of bringing out more fruit. But there’s an obvious and painful delineation between the normal, disciplinary hammer and the spiked maul of abuse, loss, trauma, and the like … Is this the work of a loving vine-dresser as well? This subject is hard to broach given that this blog isn’t about pain and suffering (for something on that try here), so let me just keep it simple. I’m not saying that this certainly would never be the case, but what I am saying is that if God allows pain to come into your life it is not – if you are in Christ – because of wrath or judgment. What is more to my point is that when we suffer, it isn’t meaningless; it can be purposeful. It can give power to spread the light of Christ into a darkness otherwise untouched.

We’re made of gold not for ourselves, not for the humanist to fill in the dents and dings of life with jewels and boats or buff out the scratches with wax and Botox; but so that when – yes, again, so that when the hammer comes it will only ever unlock the latent purpose within us to do that which we were made for: the shrinking of shadows.

George Whitefield said, “It is a poor sermon that gives no offense; that neither makes the hearer displeased with himself nor with the preacher.” It is now that I wish to offend you. Your life, your art, your skills, your sex, your relationships, and anything else that you think is or ought to be of one piece with you … Is. Not. About. You. You were made of gold for a reason, and it wasn’t to draw attention to you or your wondrous lustre; you were made with the purpose of spreading God’s image – and all those things mentioned above are His, and for His purposes.

So, why are we all here? The way I see it you have two choices: humanism, your own golden visage; or the light – and its preeminence no matter what the cost. But as for me I take the call of Christ to die to myself; to mortify in my flesh those crevasses and ripples that seek to steal a portion of light for myself, to glorify myself; and accept the hammer. I do this, of course, as I take lead from my Saviour, my Forerunner, and the One who took the hammer to His hands and feet so I could have the light in me to share with the world.