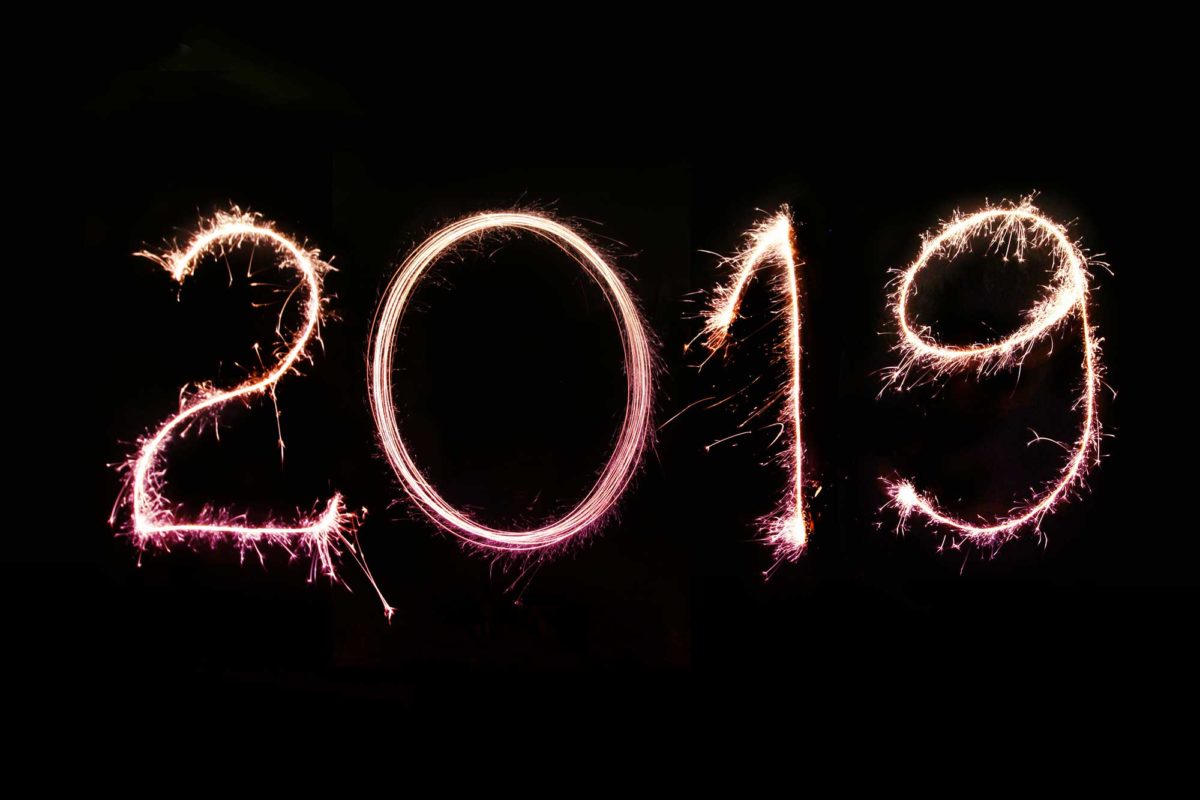 I can hardly believe it. It’s just over four years since I received an email inviting me to consider becoming Lead Pastor here at First Alliance Church (FAC). One email that changed everything. I can still remember my first visit and preaching here for the first time. I can still remember the huge transition from Amsterdam and a church that loved us to a new church that also loved us, welcomed us, cared for us, prayed for us, and supported us. I love pastoring FAC. There’s nothing else on earth I’d rather be doing. 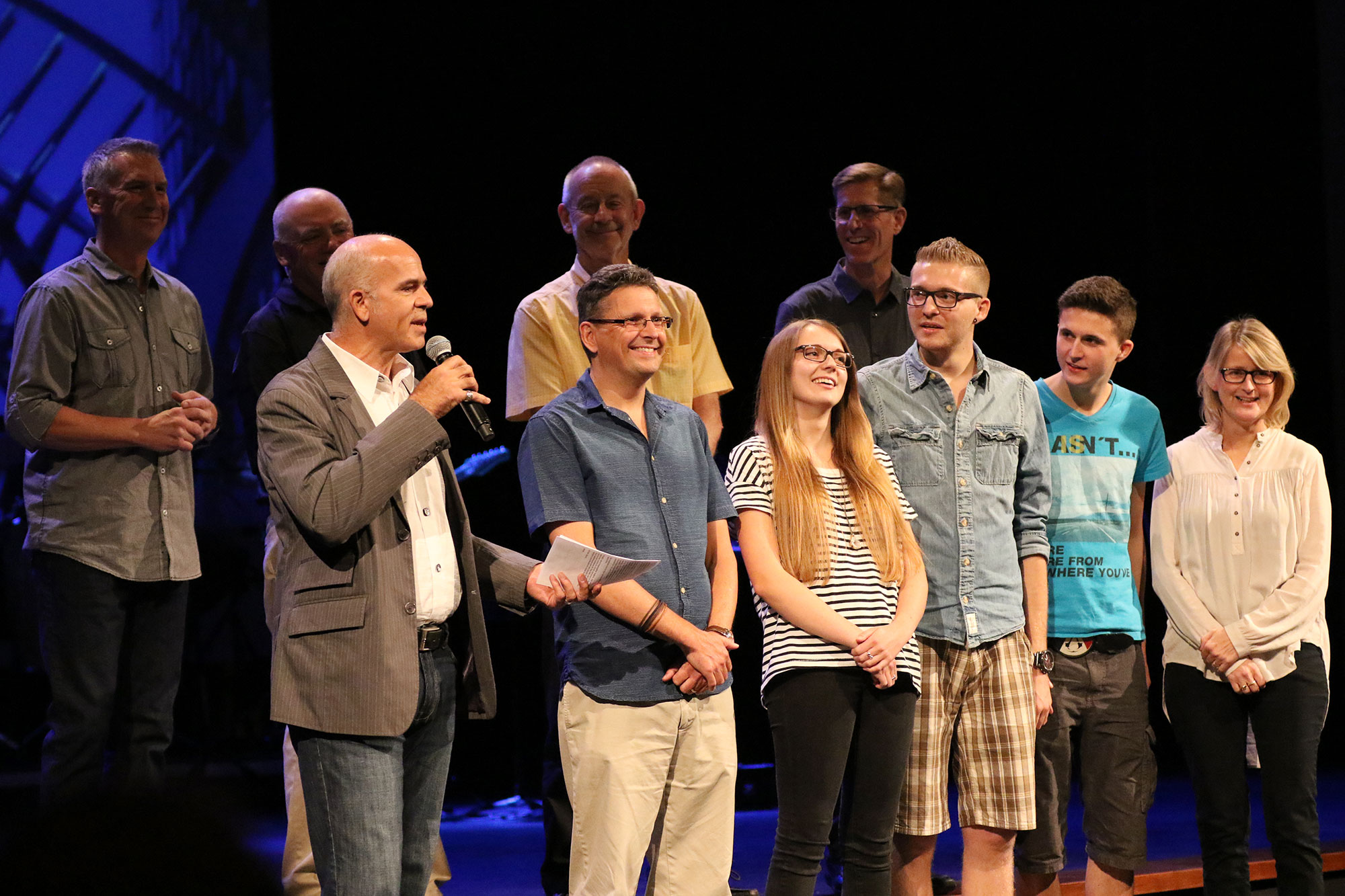 ABOVE: Throwback to Pastor James with his family (front row) being officially welcomed as the new Lead Pastor of FAC by Western District Superintendent, Brent Trask (September 2015).

I’m probably not the only person at New Year’s who looks back a little with some nostalgia, though I’m guessing most of us are straining forward, trying to imagine something of the year ahead. Will the economy pick up? What will happen to oil and house prices? Who will win the election? And can the Calgary Flames keep going?

Living in the Past

The apostle John invites us to live in the past, to recall what God has done for us:

“See what great love the Father has lavished on us, that we should be called children of God! And that is what we are!” (1 John 3:1, NIV)

And get this. His love isn’t just a mushy feeling towards you, some hormones coursing though a teenager’s system. God’s love is transformative – because God’s love is holy.

When we receive God’s love, Jesus says, we’re born from above, born again, born of the Spirit of God. Paul describes it as becoming a whole new creation – the old has gone, the new has come. Just like with a physical birth where there can be some time lapse, there’s still a point when the baby is actually born. The journey comes to a conclusion; you hold the baby in your arms! That could be you right now … Perhaps in a time warp, still tying to figure this faith thing out, still trying to discover who God is, still trying to make sense of it all. That’s OK. It’s OK to be on the journey.

But there is a point, whether we’re completely aware of it or not, when a miracle occurs, when transformation happens, when we become God’s children – forgiven and set into a right relationship with God, made alive spiritually, born again. We celebrate that moment in baptism. In fact, if you’ve not been baptized yet, we’re waiting to party with you January 19 & 20, 2019! 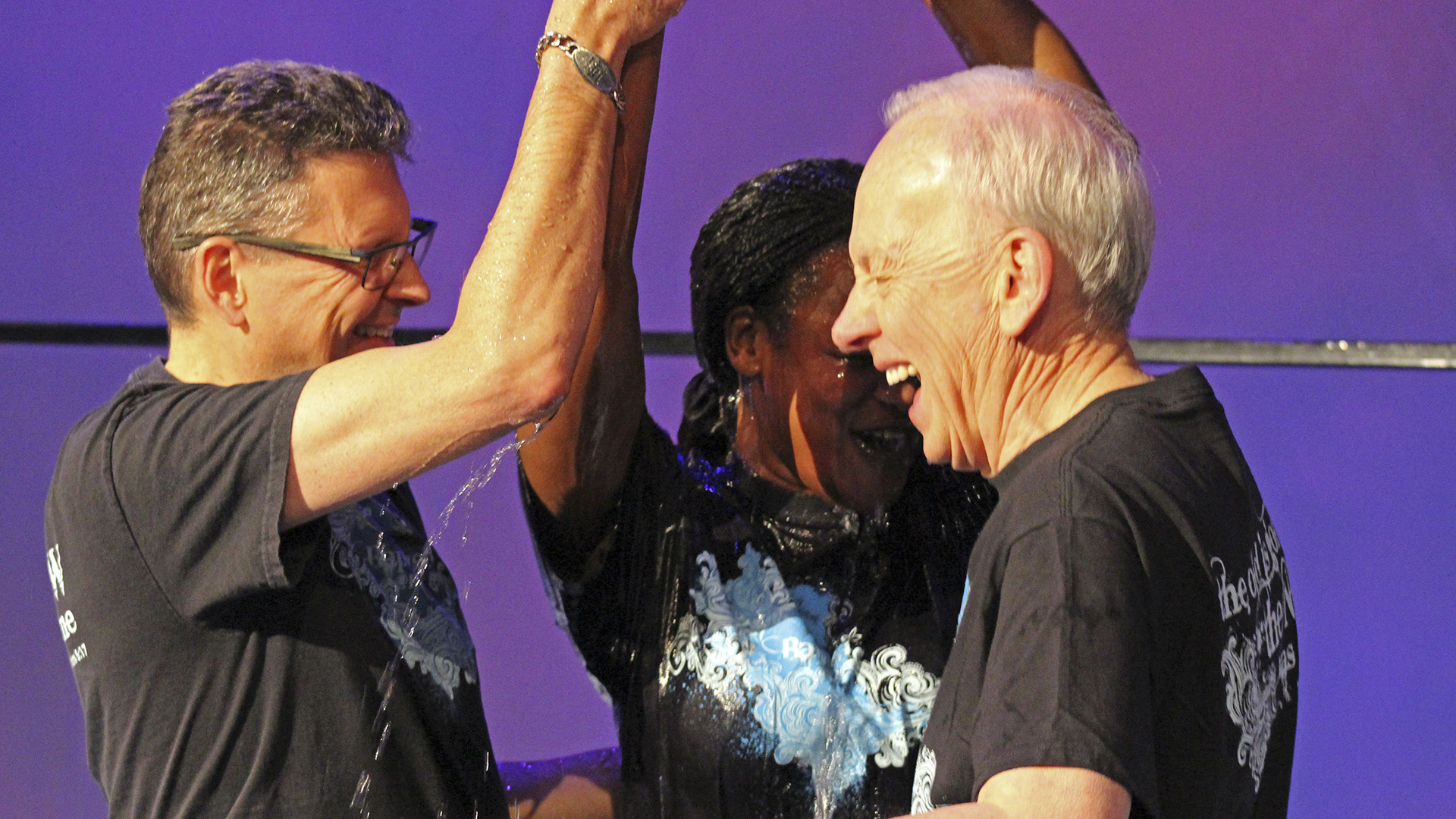 Heading for the Future

Just as the moment of birth might be the end of the journey through the birth canal for the baby but only the beginning of the journey of its life, so it is for us spiritually. Born again, God’s children – but a whole new journey of life and faith awaits us. We don’t instantly arrive in heaven. Just take a look around you if you’re not convinced! There’s a ways to go. In fact, we’re not even all that sure of what is involved:

That shouldn’t be so surprising. Meteorologists can’t even get a good weather forecast here in Calgary! We’re pretty unlikely to be able to predict what’s going to happen in life, or all of the changes God is going to work in and through us. In fact, about the only thing we can be certain of is change:

When Jesus comes we’ll be like Him. I don’t know about you, but my wife could tell you that’s going to mean a whole lot of change in my life! It would be great if God would wave a magic wand and get to it – instant Christ-likeness! Kind of like microwave popcorn. 30 seconds and it’s done. The reality is the process of life-change is much slower that that, more of a crockpot than a microwave oven. It’s going to take some time. That holy, transformative love is making us to become like Jesus. Let’s figure out the next step towards this kind of life that honours God together … Join me Sunday, January 20 for a Next Steps night at FAC designed to help us all take a step forward in our journey with God.

So, what’s next? What about here and now, our present realities?

In other words, our future hope of Christ-likeness leads to present action. We won’t just keep carrying on as before, as if nothing has happened.

Every family has its distinguishing traits – big ears, red hair, green eyes, a weird laugh. Genetics may well enable us to factor some of these things out of the equation, but I think that would be a sad day. If we don’t get to choose our parents I’m not so sure they should get to choose our traits. And besides what would the relatives have to say when they gather around the baby in the crib? Gone would be the comments about dad’s eyes, grandma’s smile, and mom’s nose. 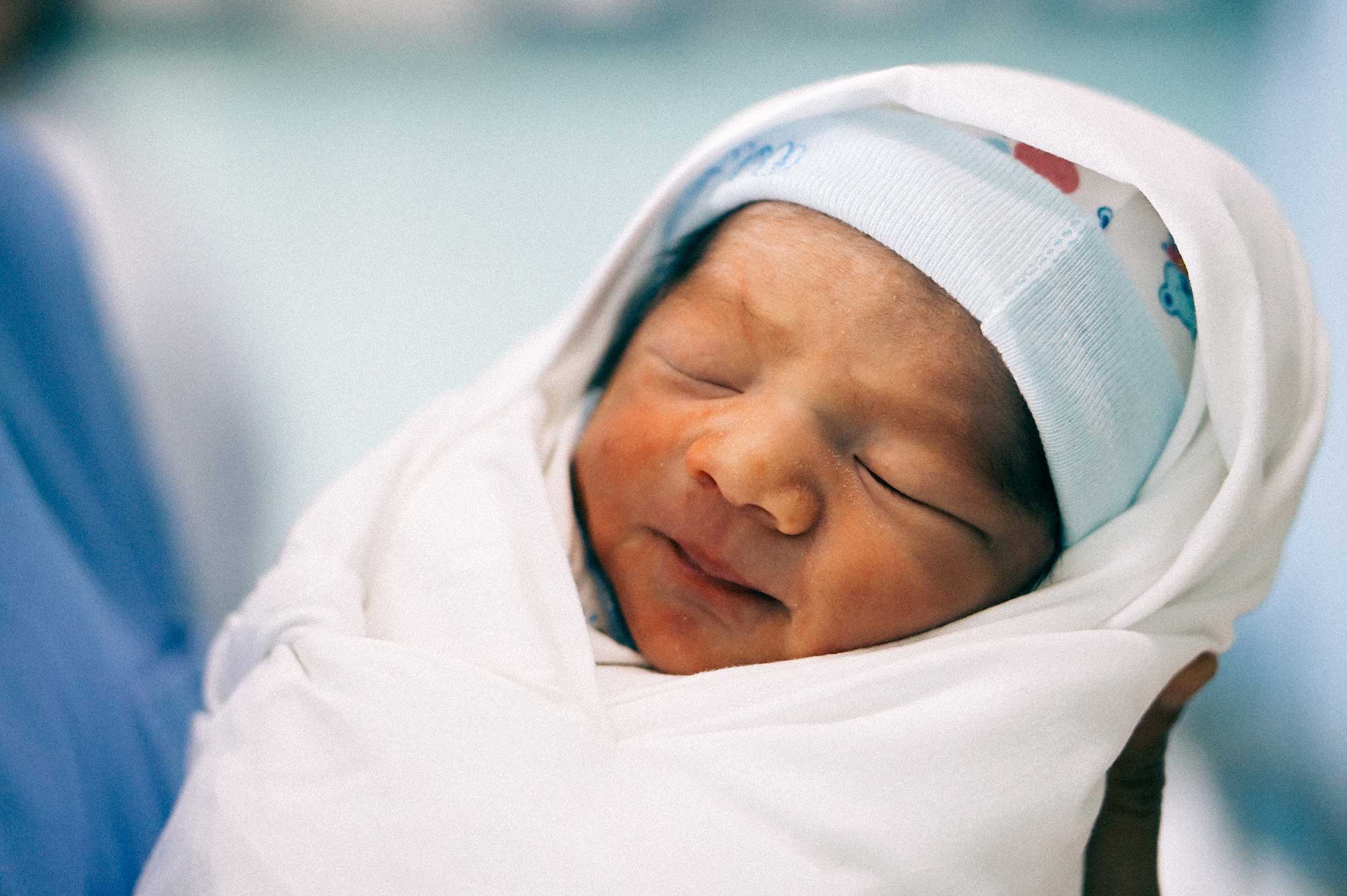 I’m not really the best person at determining who babies look like. Most newborns just kind of look small and wrinkly to me – maybe a little like grandma after all! But give it a few years, and the family resemblance easily comes to the surface. When I was born I had blond hair, then it went dark, and now it’s turning grey just like my dad’s did. At one time I could write legibly, but now I can’t even read my own writing, just like my dad. Stand us side by side and without DNA testing, you could identify my parentage.

That’s what the apostle John is talking about. There were some so-called ‘super-Christians’ in his church family who believed they’d had close encounters with God to the extent that they’d been catapulted into the realm of sinlessness. They were definitely God’s children, touched with a divine resemblance.

Everyone else in church felt like a fifth cousin twice removed. Their experience of God was drab by comparison – no mystical visions, no ecstatic experiences. They simply believed the account of John who had heard, seen, and touched the Word of Life. They were probably just a lot like you and me. Nothing that exciting ever happens. So, were they God’s children too? John writes to reassure them. He’s just like a relative peering into the crib, good at identifying family resemblances.

The test of family resemblance to God is the absence or presence of sin. Yikes! I don’t know about you but at this point I’m getting nervous. After all, we know God does not sin.

So, why in 1 John 1:10 does he tell us that if we say we haven’t sinned we’re calling God a liar, and yet, right here, he says that if we do sin we’re children of the devil? Either way we’re hooped. Talk about Catch-22. It’s all very confusing. And it could easily become depressing, because if perfection is what God is looking for, we’re in trouble. At least, I am.

Now we usually think we’re either law-abiding or lawless. The lawless drive over the limit and cheat on their taxes. God’s law is different though. It’s relational. It doesn’t get us into His family, as though trying very hard would somehow impress God. Rather, the law is a family matter, given to His children, daughters and sons who have experienced His life-transforming, holy love.

Keeping the law is not about buying favours from God but living in relationship with God. Breaking the law is about living life on our own terms. It’s probably a lot like how things are in your family. Washing hands before you eat doesn’t make you a family member; it’s a sign of respect and good hygiene.

Children often disobey rules at home, sometimes out of carelessness, forgetfulness, immaturity, or mistake. Their actions are wrong, but not necessarily mean-spirited or rebellious. Then there are other times! The child knows what to do and chooses to do the opposite! Rebellion rises to contest authority. Getting their own way seemingly is more important than a wholesome relationship with their parents. That’s what John means by lawlessness. Working with the family rules builds trust, openness, respect, order, and security. Flagrantly disobeying damages homes and families and relationships.

What this passage tells us is that lawlessness is flagrant disobedience, outright rebellion, selfishness, and disregard for God. Lawlessness is of the devil. Lawlessness is sin. It’s an attitude that spills over into behaviours.

He’s not suggesting we need to be perfect performers in every aspect of life. We’ll all still get sleepy, stressed out, and are subject to ignorance, mistakes, hormones, old age, and a thousand other limitations. We do get it wrong – often. But the great news is that God’s holy, transforming love frees us from this rebellious attitude.

Just as who is pure? The answer is Jesus. He’s our model – the example we follow. He’s our motivation – for one day we’ll see Him face to face and be just like Him. He’s the means of transformation – because He is the hope that’s in us. He’s the one who destroys the works of the devil. Everything we do is by His grace, allowing Him to work in us; to obediently follow the path marked out for us. 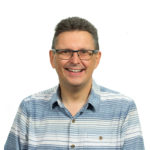 Who knows what this New Year might hold for us? Certainly not me. But one thing is certain: God is at work in our lives transforming us and making us to become more like Jesus! That’s what I’m looking forward to this year.

How has God been transforming your life? No matter what your story is, there’s someone else who needs to know they aren’t alone in their journey. Fill out this form to share your story, and we’ll be in touch to follow up with you.