A Reflection on The Apostles’ Creed 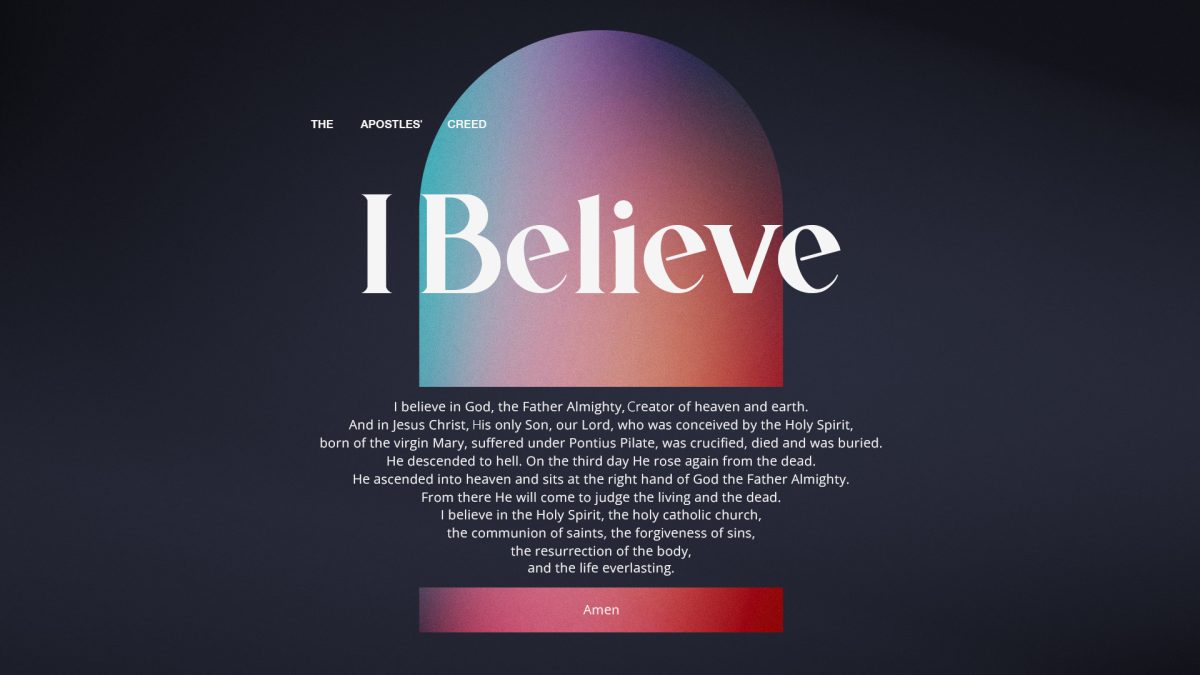 We’re beginning a new teaching series at FAC called ‘I Believe’. We’ll learn about the history, theological depth and spiritual relevance of the ancient declaration called the Apostles’ Creed. For centuries, Christians of various traditions have recited the Creed, but it’s more than a series of cleverly crafted statements. It’s a declaration of our faith and addresses some of the questions that life throws at us today. So let’s take some time to consider a few of these statements.

I believe in God, the Father Almighty,
Creator of heaven and earth.
And in Jesus Christ, His only Son, our Lord,
who was conceived by the Holy Spirit,
born of the virgin Mary,
suffered under Pontius Pilate,
was crucified, died and was buried.
He descended to hell.
On the third day, He rose again from the dead.
He ascended into heaven
and sits at the right hand of God the Father Almighty.
From there He will come to judge the living and the dead.
I believe in the Holy Spirit,
the holy catholic church,
the communion of saints,
the forgiveness of sins,
the resurrection of the body,
and the life everlasting.
Amen.

I remember being 10 years old, reciting the Creed every Sunday in the Anglican Church we attended. In those days, saying the Creed always lifted my spirit. I wish I could say it was because I loved Jesus so much⁠—but it was really because it meant it was nearly time to go home! I’m grateful that I have now come to love the Creed for a more meaningful reason.

It’s easy to go through the motions of church and replace true worship with traditions and activities, but true worship is less about our actions and more about our willingness to surrender to what God wants us to say and do. We draw near to God in worship because we love Him, we want to be with Him, and we want to know Him.

It’s this bold declaration of our faith in the Triune God that sets us apart from other belief systems and traditions. As Christians, we believe that God is not merely a “force” or some energy, but He is the Creator of heaven and earth, and He is our Father. God is all-powerful, yet personal.
We believe that God the Creator humbly stepped into the reality of our human existence in the person of Jesus Christ, and He became one of us, no longer far from us, but with us. Jesus confined Himself to the limitations of humanness to the point of suffering, so that He could overcome sin and death for us and teach us how to be human by God’s design. He showed us what life looks like ‘the Jesus way’, urging us to believe in God and to learn from Him (John 14:1, Matthew 11:29).

We believe that after Jesus returned to heaven, God remained with us in the person of the Holy Spirit who embraces, educates, edifies, and empowers us. When I describe God as a ‘person’, it’s not to say He is a creature like us, but to acknowledge that we are persons because God made us in His likeness.

I sometimes introduce myself as a person of faith, in the hope that it will lead to a conversation about God. But I don’t think that statement really sets me apart from anyone else; after all, are we not all people of faith in one way or another? When I start my car in the morning, I’m exercising faith; I believe that it’ll run even if I can’t explain the technology behind it.

Everybody has faith in something or someone, but it’s not always in God. In the Creed, we boldly declare that “we believe in God,” even when we’re challenged about His existence. The Creed is a series of faith statements. We believe them to be true, not necessarily because we have the explanations and evidence for them, but because we have faith in the One of whom they speak.

Books, Bonds, and the Bible

Why is there a Creed, and why do we need a statement? In the 4th century, when the Nicaean Creed was commissioned, one of the reasons was for unification in faith. When we say the Apostles’ Creed, we essentially make a statement of agreement that unifies us with millions of others who also believe in the Triune God. The God spoken of in the Creed is the same one whom we read in the Bible. Therefore, to say the Creed is to declare that we believe the Bible.

Have you ever questioned the validity of the Bible? How do we know we can trust what the Bible says? Are the Scriptures infallible, inerrant, true? Many books have been written, and a lot of research done on this matter. While some search for the assurance that the Bible is trustworthy, some search for ways to disprove it. Researchers continue to search for primary sources to corroborate the Bible’s claims and many valid discoveries have been made, but the Bible remains the only primary source for most of our understanding of God. Therefore, it is important to remember that the Bible does have a primary source, and that is God himself. Everything we know now begins and ends with him.

From the Bible’s 66 books, written by various authors, we learn that the authors wrote because they first had a relationship with God. Many of them did not write because they had done the research, but because they had experienced God and they were enabled by the Holy Spirit to document His words. The Bible is no ordinary book; it’s one of the ways by which God reveals Himself to us, it’s the very Word of God. We should therefore read it with an expectation to encounter God through reading it. The Bible is prophetic; therefore, it proves itself and speaks the truth of things past, present, and still to come.

Have you witnessed an argument where well-meaning people have conflicting reports of the same event? One person says it happened this way, and the other says something completely different. Then the argument begins, because all parties believe that they are right! In that scenario, who do you call a liar, and how do you prove it, especially if everyone is stating their own truth?

You may have noticed that the most controversial debate topics often involve God, faith, or morality. Throughout history, many atheists, philosophers, and theologians have debated, and argued for or against God; and the debates continue. Some iconic examples include Anselm’s ontological argument (11th century), and Aquinas’ cosmological argument (13th century).i In the Bible, God speaks for Himself, like in this example through the prophet Isaiah:

“This is what God the Lord says —
the Creator of the heavens, Who stretches them out,
Who spreads out the earth with all that springs from it,
Who gives breath to its people,
and life to those who walk on it:
‘I am the Lord; that is My name!
I will not yield my glory to another
or my praise to idols.'”

My questions for you are: how is God speaking to you today? Can you share your own experience of Him? God is inviting us not just to know of Him, but to intimately know Him and allow Him to shape our lives by being our Father.

Another argument to consider is that of relative versus absolute truth. In a paper by Manfred Harth, he asked the question, “Is Relative Truth Really Truth?” ii This is an important question these days when absolute truth is increasingly questioned, and the relativization of truth grows in popularity. Relativization is naturally part of human behaviour, but can it really be applied to the truth? If applied to truth, would it still be the truth? Or does it become an opinion or perspective? For example, I could declare that ‘escargot is delicious (I genuinely believe that), and it may be true for me, but it may not be true for someone else. Harth explains the relationship between assertion, belief, and truth, saying, “to assert is to present as true, to believe is to acknowledge as true.”

Truth goes beyond our opinions or assertions. Truth is truth because it is real, trustworthy, and steadfast. Truth is definite, provable, and absolute. Truth is foundational to reality and essential to existence. I have never experienced quicksand, but I imagine that a world without foundational truth would be like walking on quicksand. It would suck us in and suffocate us. That is what it is like to live a life framed by deception.

One of the reasons why the concept of relative truth is growing today is the definition of right and wrong. If absolute truth pronounces something wrong, relative truth could challenge that by saying, ‘it may be wrong for you, but right for me’. Behind the relativization of truth is the fight against God and His standard of morality, since God is “the only source of morality that is totally absolute.” iii Jesus did not explain truth as a concept but as a person. Of truth, Jesus said, “I am the truth” (John 14:6); and of deception, He said, “the devil is a liar and the father of lies” (John 8:44). This is Jesus’ invitation to anyone searching for truth, to come to Him. He is steadfast, faithful, and absolutely true.

Finally, of the many truths we declare in the Creed, I’d like to touch on one more. Jesus suffered, was crucified, died, and was buried. Suffering and death are some of the hardest parts of being human, and Jesus, God in the flesh, didn’t shield Himself from pain. It’s hard to accept when good people suffer, and bad people escape scot-free. Through His suffering and resurrection, Jesus overcame sin and death and made it possible for us to do the same.

I’ve heard people ask, ‘how could a loving God allow evil’? My answer would be this: for the very reason that He is loving. The Bible tells us that He allows His rain to fall on both the good and the evil (Matthew 5:45). God created us with the ability to choose between good and evil, and He allows us the freedom to do stupid stuff. He does not tie us down, and his grace means that He is willing to rescue and redeem us when we repent. Take note though that the Creed also reminds us that God will judge us all, and evil will one day be accounted for.

As we go into the coming weeks, I pray that we will experience the truth of God’s Word in a fresh and real way through the Apostles’ Creed; that we’ll be released to live Holy Spirit-empowered lives; that we will learn from the humble and gentle Jesus, and find rest for our souls.

Written by Tolu Solola, Congregational Care Associate Pastor at First Alliance Church. To help us remember The Apostles’ Creed during this series, we’ve designed some free digital wallpapers for download.