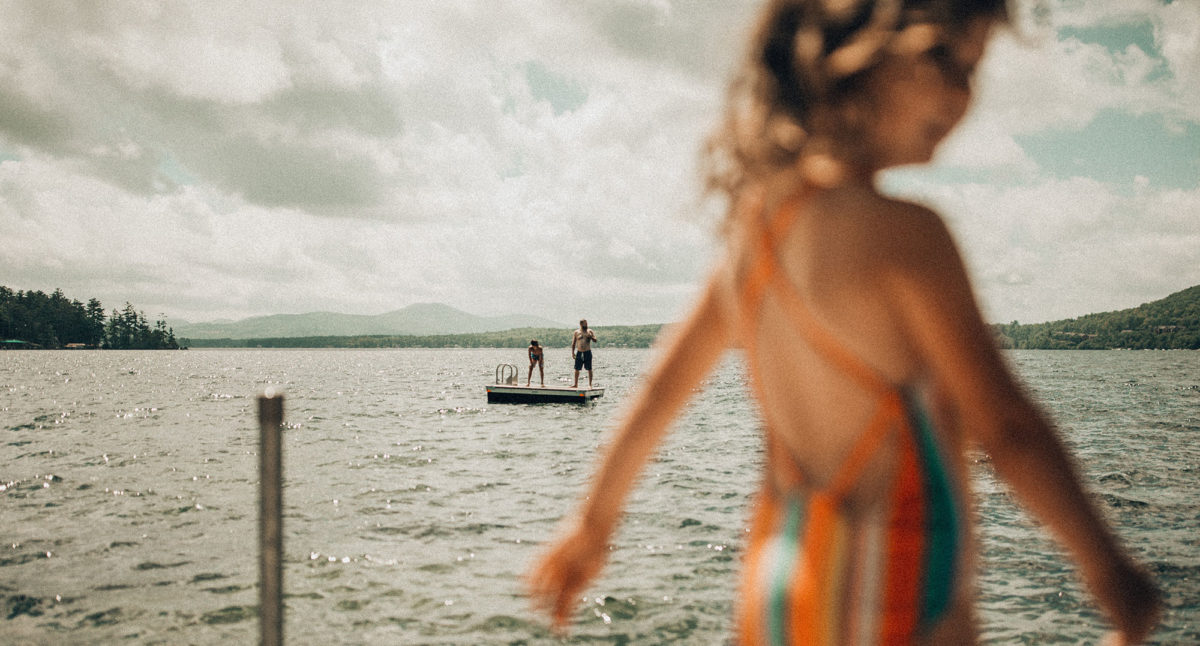 When I was a child I would swim in the lake near my uncle’s cabin in Wisconsin, but I wouldn’t last long in the deep water. I would start to wonder how deep the lake really was and what kinds of creatures there were swimming about below. I’d panic and scramble back into my uncle’s boat for fear of a large fish biting me, or maybe even swallowing me whole. Later on, I had to quit swimming lessons altogether because I was afraid sharks would break through the floor of the deep tank and race up to eat me. The surface of the deep appears calm to the innocent swimmer, but who knows what dwells below.

I am reminded of how the ancients thought about the deep waters: to them, the deep represented uncertainty, danger, confusion, chaos, the underworld. So it’s beautiful to me that God’s initial act of creation is one that brings order to the chaotic waters.

“In the beginning God created the heavens and the earth. The earth was formless and empty, and darkness covered the deep waters. And the Spirit of God was hovering over the surface of the waters.” (Genesis 1:1-2, NLT)

When I imagine that water, it’s inky and black like an endless mirror and I know I wouldn’t want to swim in it, even now that I’m an adult. I’m a prairie girl; I’ll stay away from the deep ocean diving, thank you.

But the Father isn’t afraid of the deep. He speaks and His words bring order … They bring light … they create.

Jesus, the Word, was there at that moment of creation.

God sorted out the waters of chaos, but humanity chose chaos all the same. But God doesn’t leave us in the inky darkness we choose for ourselves. He is God with us in the mess. He isn’t afraid of the deep dark waters of my heart. He invites me to step out of the boat where it’s safe and dry, and to join Him in the deep. He brings His creative power to the waters of my heart, and then He leads me into the depths of the rest of the world.

Moses was like Jesus. He led the Israelites through the waters of the Red Sea, away from the Egyptians’ enslavement and on to freedom. As the waters close up again, the oppressors are drowned in the deep and the chosen ones journey on.

When the waters saw You, O God,
when the waters saw You, they were afraid;
indeed, the deep trembled.
The clouds poured out water;
the skies gave forth thunder;
Your arrows flashed on every side.
The crash of Your thunder was in the whirlwind;
Your lightnings lighted up the world;
the earth trembled and shook.
Your way was through the sea,
Your path through the great waters;
yet Your footprints were unseen.
You led Your people like a flock
by the hand of Moses and Aaron.
(Psalm 77:16-20, ESV) 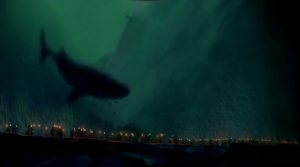 I remember watching DreamWorks’ The Prince of Egypt when I was a child. Did you see it? They take some creative license with the story, but their depiction of the parting of the Red Sea has these incredible sea creatures swimming in shadowy silhouette behind the walls of water on either side. The people walk through between the waves in awe of what God has done.

I was a fearful child, but Jesus has led me through those waters. Even in the past few years, as an adult, I’ve seen how He can split the seas of my fear so I can walk on through. I still have to regularly fight to choose courage, but I am not a slave to fear anymore.

For Jonah, the next step was to go to Nineveh and share the love of God with the people there. But he was too afraid, so, strange as he was, he fled to the sea. The waters become ever more chaotic as he flees further from God. It’s like the waters are clapping their hands and laughing up a storm, eager to encourage the prophet’s rebellion and, next thing we know, the story finds Jonah deep in the belly of the fish, sinking ever-deeper into the bowels of the sea and further from the place God called him to.

Jesus sank down into the depths of chaos too, but not because He rebelled against God. He did it out of obedience to the God who sent Him down there to save us Jonahs. Jesus drew a comparison between Jonah and Himself …

His death on the cross marked the beginning of His descent into the depths of hell. He dove deep into the waters of my sin: my fear, my pride, my lust, my gluttony, my laziness. He was dragged down in the depths by the weight of my sin chained to His body. He was crushed by my sin like the weight of the ocean on a diver gone down too deep. He was lost in the deep like a criminal sailor, tossed overboard and buried at sea. The chaotic rebellion of my life formed His watery grave.

I accepted Christ as my Saviour and He raised me up from the deep, but, in being baptized, I joined Jesus in His death and descended back down into the waters of His grave.

… have you forgotten that when we were joined with Christ Jesus in baptism, we joined Him in His death? For we died and were buried with Christ by baptism. And just as Christ was raised from the dead by the glorious power of the Father, now we also may live new lives. (Romans 6:3-4, ESV)

But that’s not all, of course. I was dragged up from the water – sputtering, blinded by water in my eyes and bright lights in my face. I was bedraggled and soaked, perhaps a little like Jonah vomited up on the shore. This moment is meant to parallel Christ’s glorious resurrection from the grave, but I don’t think I quite did it justice. I’m thankful that Christ expects my awkwardness and my clumsiness. He sets me on solid ground and points me towards a resurrected life, fully aware that my resurrection will be messy and awkward.

I was baptized in high school after years of wondering when the best time would be to do so. Should I wait until I went to Bible school in England? Maybe get baptized in some picturesque river? No, I decided I would do it when I got back and could make sure I didn’t have any ulterior motives. I was baptized at my church in Sherwood Park, with no fear of the water by that point. Thankfully, it wasn’t that deep and I didn’t have visions of sharks circling around me. I was moved by the importance of making that public statement, of telling the world that I was uniting myself to Jesus. Now, when I start to sense doubt circling my heart like a hungry shark, I remember that public commitment that I made and it helps me to hold on to my faith.

Remembering my baptism is a movement of continually going deeper into God. It also involves allowing God to move deeper into me to find those places where more healing needs to take place. It’s an act of courage to dive down into the chaos of my heart, to confront the chaos that is there and to ask Jesus to bring His resurrection power. It’s an act of courage to confront not only the chaos of my own heart, but also the chaos of the rest of the world. Too often we react to the world’s chaos by closing our eyes, by becoming overwhelmed, by becoming pessimistic and cynical, by focusing only on resurrection and life. We stay – I stay – in my comfortable home and escape from the world instead of acknowledging its brokenness and helping to renew it.

The little girl in me would rather stay in the safety of her uncle’s boat, comfortable and safe and dry and warm. But the adventure happens when you jump out and go tubing, when you go swimming and maybe put your goggles on so you can see what’s going on down below. Today, I remember my baptism by, in a way, continuing my baptism. I push myself to confront the darkness in my heart. I invite the Spirit to hover over the waters and, with His creative power, bring renewal and new life.

On October 13/14, 2018 Pastor James taught about baptism and we celebrated 36 people taking the step of getting baptized here at FAC! Watch the Sunday 11:15 am service here. Want to learn more about baptism? Sign up for the next Preparing for Baptism info session.